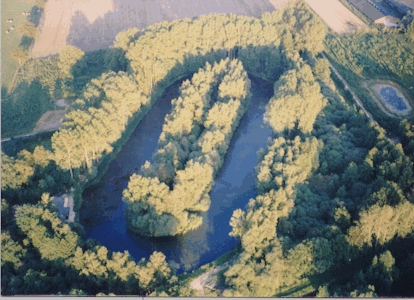 Here follows information about the area that is situated in the Netherlands between the villages Laren, Holten and Markelo.
About 20 years ago nearly 100 percent of the people who lived in this area lived from the farming-industry. Now there are only a few farmers left.

This aerial photograph was taken (from an air-balloon) in the neighbourhood of my home.
It’s a splendid skating-rink, situated in a wood, named “Roowinkel”.

So together a rugged-corner. The words “Roo” and “winkel” are old dutch words.

In the past “Roowinkel” used to be a fen-area. It was useless for farmers.
The ground was very marshy and it was often under water.

In the year 1950 some farmers started the ice-association “Roowinkel”. In the beginning it was very primitive.
There was no clubhouse, There was no lighting. There were no machines.
During the winter many people worked with brooms to get the rink snow-free.

In the year 1960 there was a radical extension of the ice-rink.From that moment the rink was an official 400-meter-rink.
We were qualified to organise official competitions. Also we got a separate rink for the children.

Many improvements have taken place on and round the rink. For example: We built a clubhouse

We built a separate shed for storing the machines and tools.

Running an ice-rink is quite a job.

In the different seasons there is much work to do.

IN AUTUMN:
Pruning the trees. (The rink is situated in a wood)
Cleaning the rubbish from the water
Sending the members invitations to visit the members-meeting.

IN WINTER (when the rink is open for visitors)

Organisation of competitions for the children and also for adults.

To get a perfect rink we spray water on the ice. 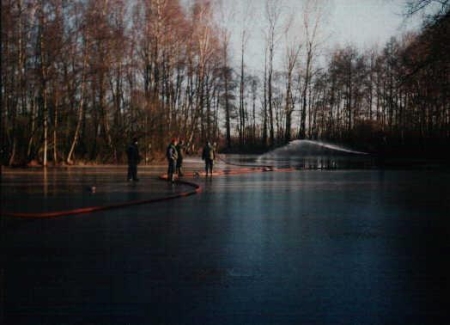 (This takes place with assistance from the fire-brigade)

Together with five other ice-rinks we are represented in the region as: “Kring de Graafschap”Once a year we have a meeting to agree the activities for the coming year. We try to spread the events. It’s a pity if important regional skating competitions are organised on the same date.Also any possible new rules for skating competitions are discussed.
In addition we are a member of the KNSB (“Gelderland” region)

In the Netherlands there is a very famous competition called:

It is also possible to skate this tour on “Roowinkel”.
It’s called: The alternative eleven-town-tour.
When you finish you receive a beautiful certificate. 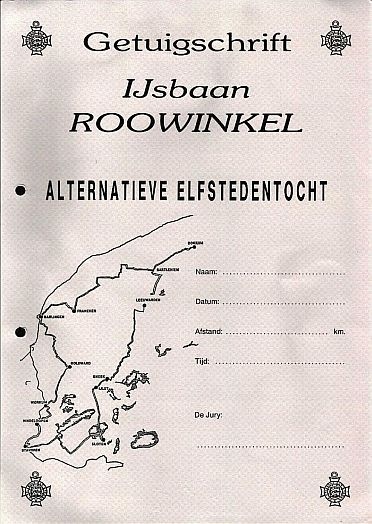 The real 11-town skaters are honoured by our ice-club.

To become a skilful skater there are lessons for the children.
Afterwards they receive a real certificate.
Certificates are in different levels. 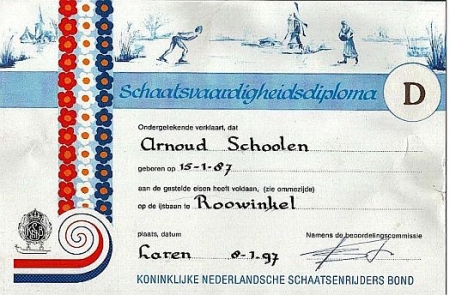 Example of such a certificate.
A special service that we offer is skate sharpening.
We have a person that has a lot of experience in skate-sharpening.

WHAT HAPPENS IN THE WINTERS WHEN IT DOESN’T FREEZE?

When we can’t open the rink, because there is a winter
with a mild climate, we give a special show to our members.
We perform a play!!
So as you can see “Roowinkel” is more than a simple ice-club.